Affiliate links are used on this page. See my disclosure page for info on affiliate programs.

In this DIY tutorial, I show you how to make a DIY LED Light Costume.

The materials of for this project are fairly cheap and they can be used for many other projects.  I’ve included a list of the same materials I used below:

DIY Plans for this project are available for download. 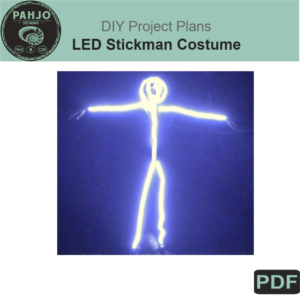 Introduction:  How to Make a DIY LED Light Costume

First, to find a Halloween costume which sparks my son’s interest is challenging.

To be honest, I sighed a bit when my wife and our son approached me about this DIY LED Light costume.

However, my mind quickly changed as soon as they showed me this costume.

Ultimately, I was curious to learn the answer to a few questions about this costume.

First, I measured the amount of LED Lights needed for the project.

Next, I used a string to make the following measurements:

Also, below is a quick diagram you can reference for the rest of this post 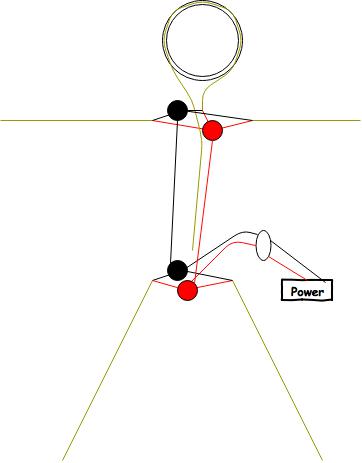 First, I cut the LED light strips according to my measurements in step 1.

The LED light strip I used clearly indicated where to make the cut. 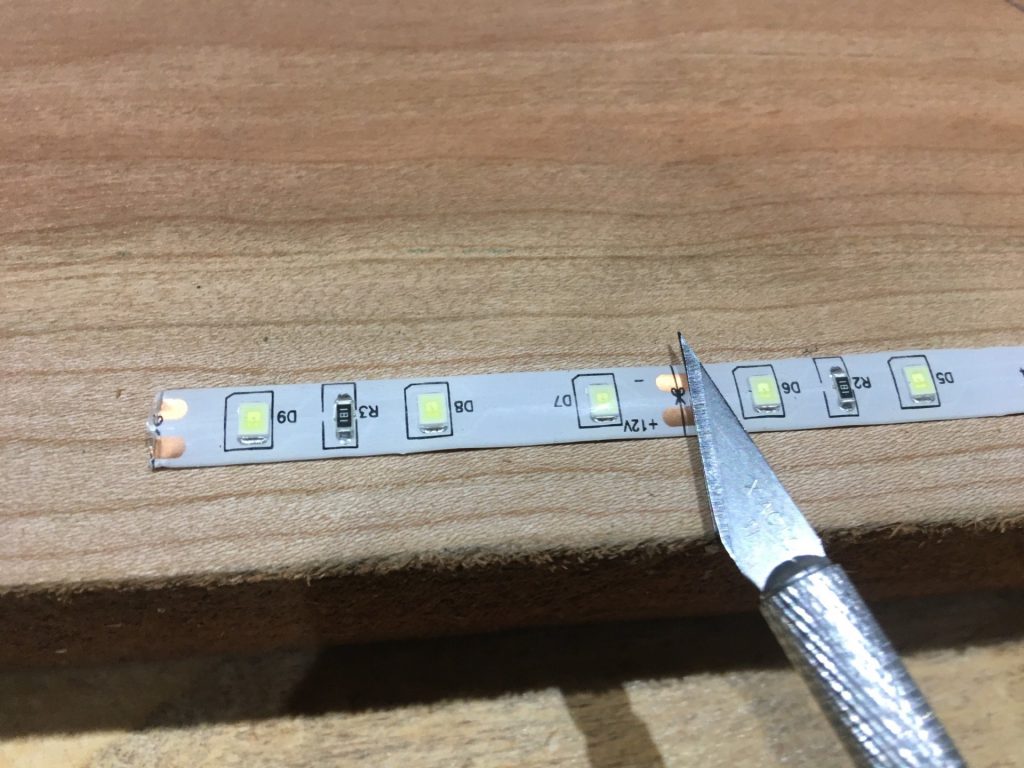 I connected the power supply with a male connector adapter.

How to Solder LED Light Strips

Ultimately, soldering is a skill that people should learn.

Why should you learn to solder?  Because it is a useful skill to use to splice LED light strips, fix electronics, and much more.

Soldering is the process of using a filler (solder) material to join pieces of metal together at a relatively low temperature (around 400 degrees Fahrenheit).

It may look daunting at first glance, but it is really quite simple.

This kit has everything you need to get started with basic soldering at an affordable price.

Finally, keep reading to learn basic soldering tips which should be enough to get your started.

The power supply for the DIY LED light costume is rechargeable and small enough to fit in the pants pocket.

In order for the power supply to easily disconnect from the LED lights and provide enough slack to rest in the pants pocket, I soldered a male plug.

First, I identified the positive lead (red) and the negative lead (black).

Next, I heated my soldering iron and placed it on the connections to get it hot.

Then, I placed a tiny bit of solder on both ends of the each connection point (4 in total) as this makes it easier to make the connection. 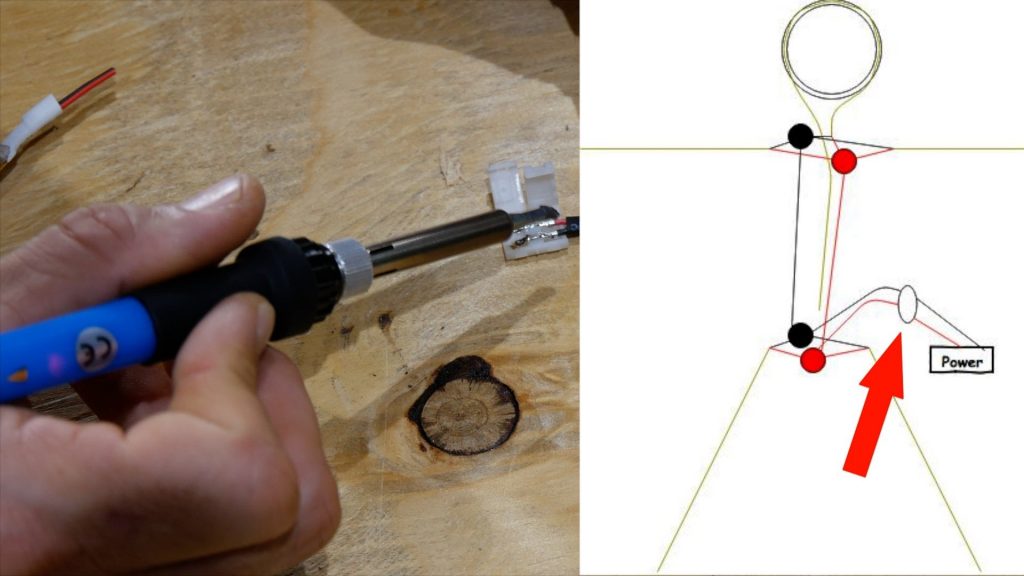 I matched the wires (red to red and black to black), verified the metal was touching, placed the soldering iron and solder on top, and melted them together.

When soldering, the wires (top left of picture above) only need to be protruding from the cable jacket about 1/16″ to 1/32″.

The white connection cover on the power supply was already in place.

First, I stripped the outer silicone coating to expose the 2 connections on the LED Light Strip. 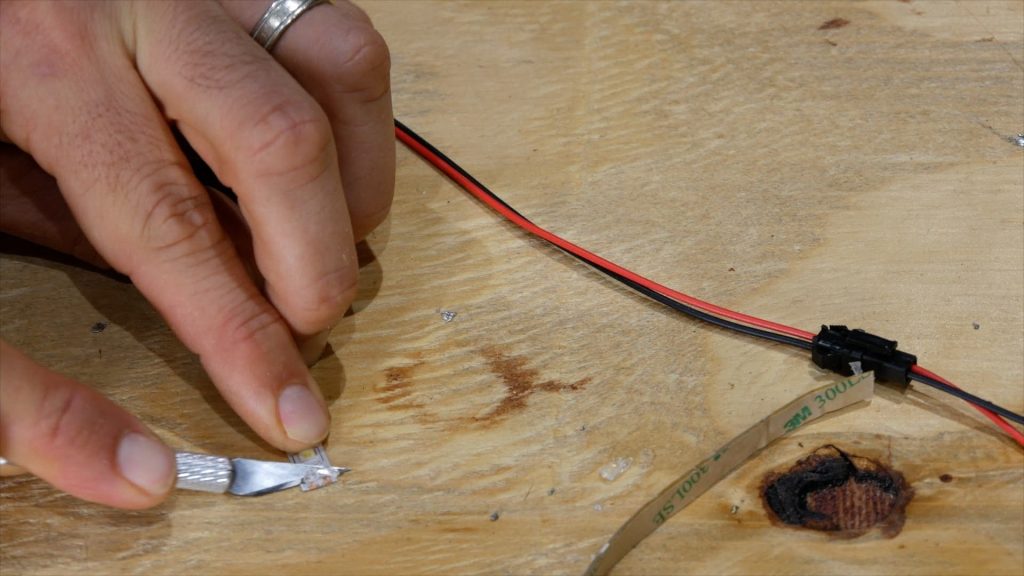 Then, I prepared the wires and LED light strip metal connection points by putting a small amount of solder on each.

I soldered the 2 together. 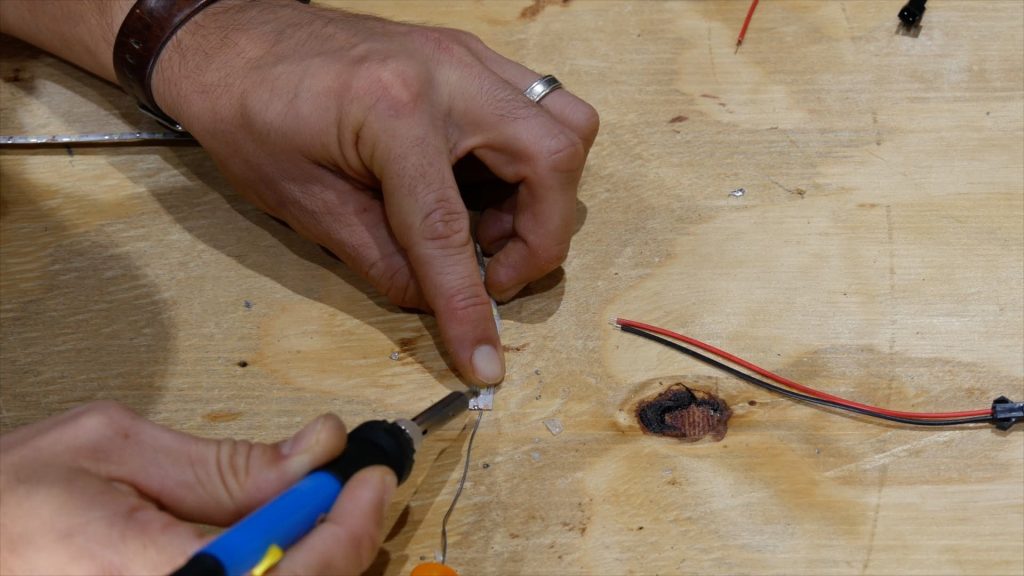 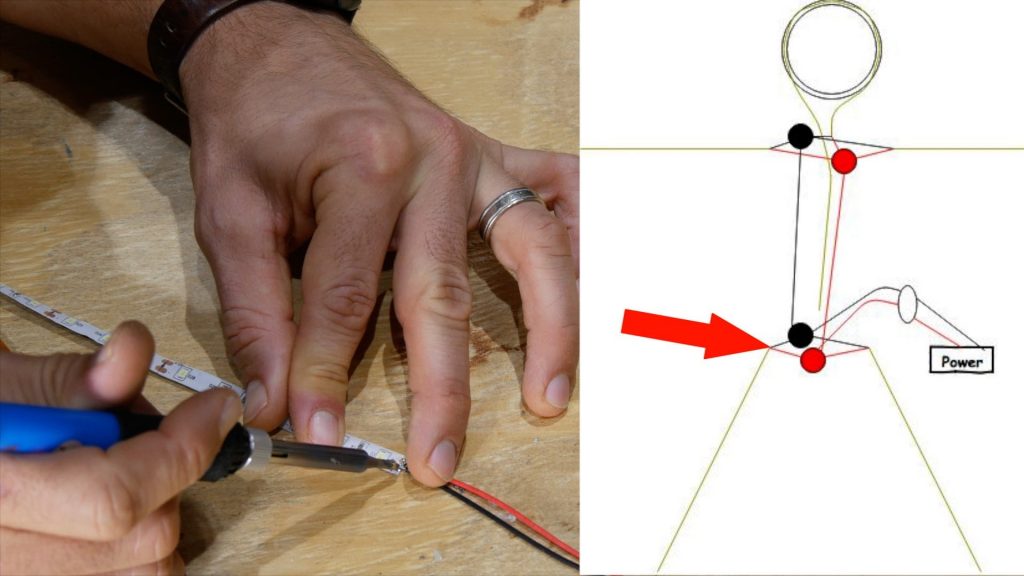 In this step, I soldered the bottom connections to merge the leg LED lights, power supply, and a male plug for the top LED lights.

Also, there are a lot of connections in this step and can be confusing.

To clarify, I listed them below for reference.

NOTE:  To join the LED Light strips on each leg to the other wires, I used the wires from a male and a female plug.  I simply cut the plug off and used the wires. 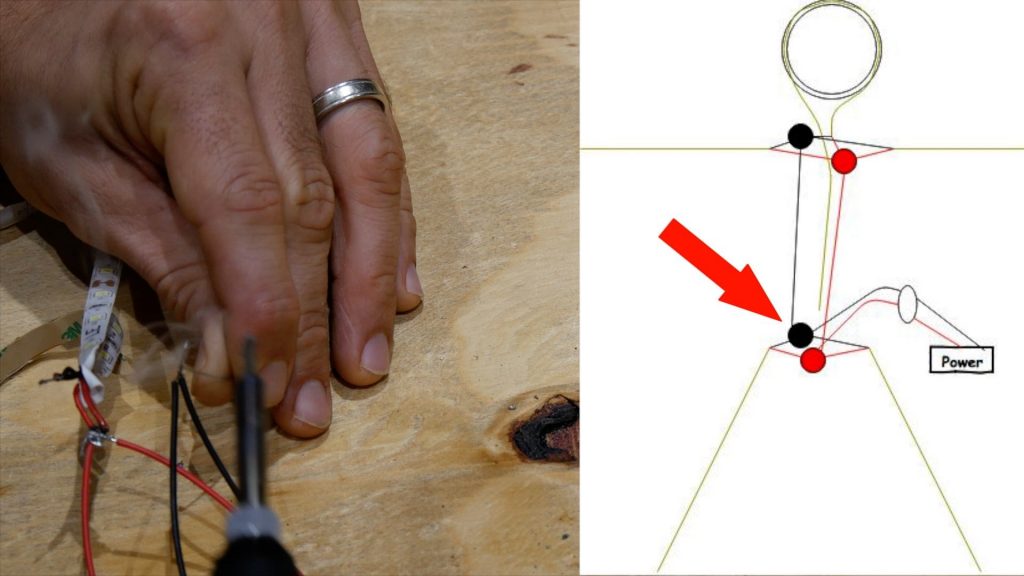 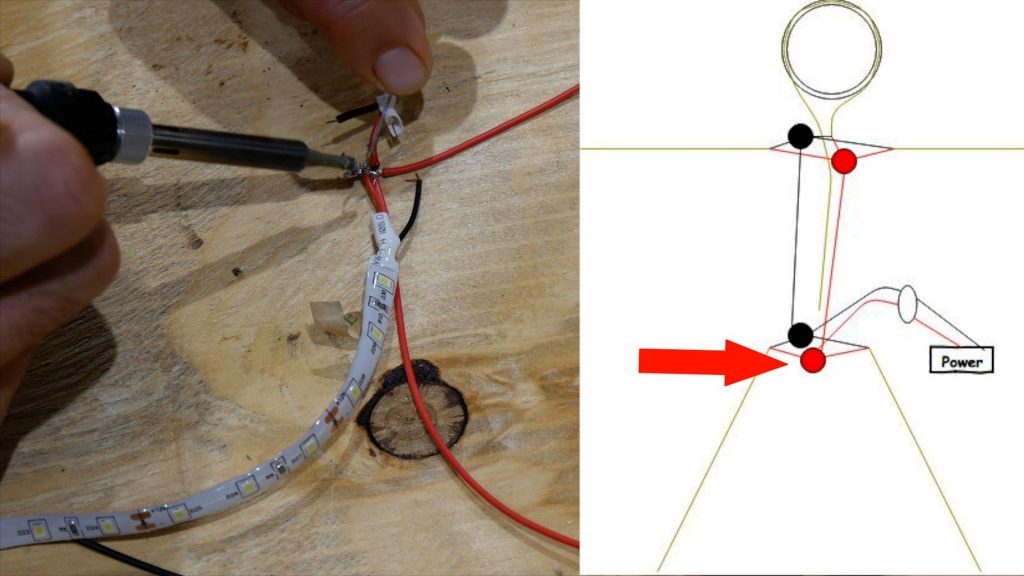 Also, I’m certain there is a ‘cleaner’ method for doing this, but I was in a rush.

Halloween was roughly 2 hours away when I started this project.

I stripped about 1/4″ of the wire jacket.

Next, I twisted the wires together, heated them with my soldering iron, and put solder on them to hold them together.

I repeated the process for the negative (black) leads.

Then, I used heat shrink wrap to protect the exposed wires.

Also, electrical tape can also be used; however, shrink wrap is more permanent.

I used 2 wires that were fairly long (roughly 8″) to connect the bottom LED light strips and battery pack to the top.

First, I cut a small incision in the top of the pants near the left pocket for the battery wire.

Next, I cut a small incision on the opposite side.

Then, I ran the wire through the incision, under the shirt, and out an incision I made in the chest area. 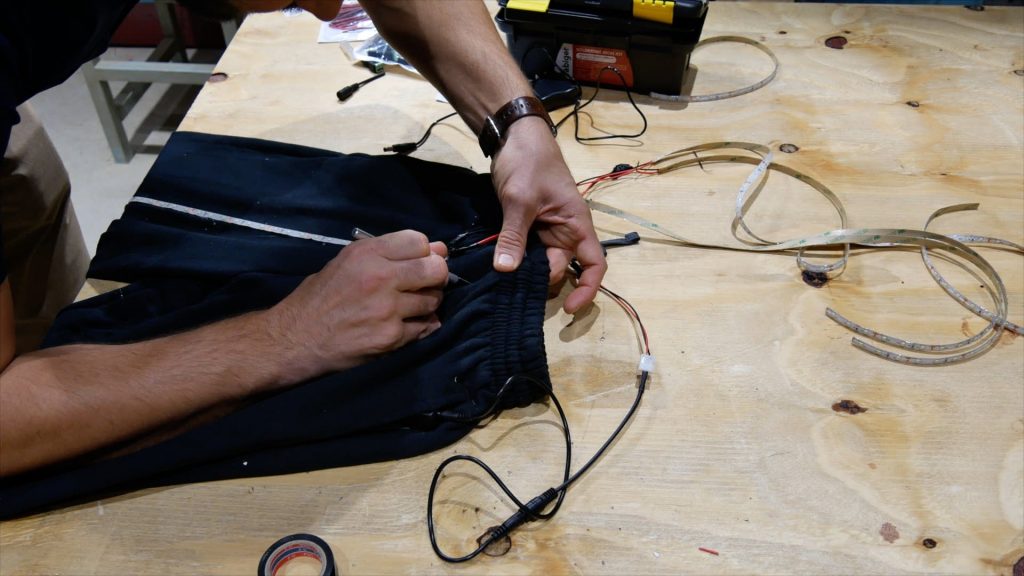 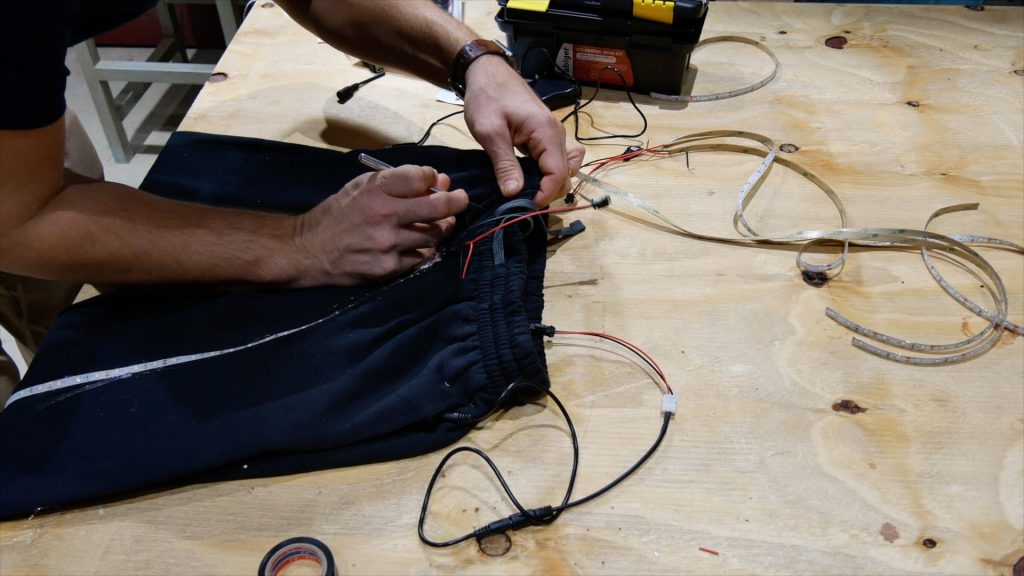 First, I repeated the same process to connect the top wires as I did on the pants in step 5.

Then, I connected the top and bottom together with the plugs to ensure it worked properly before proceeding. 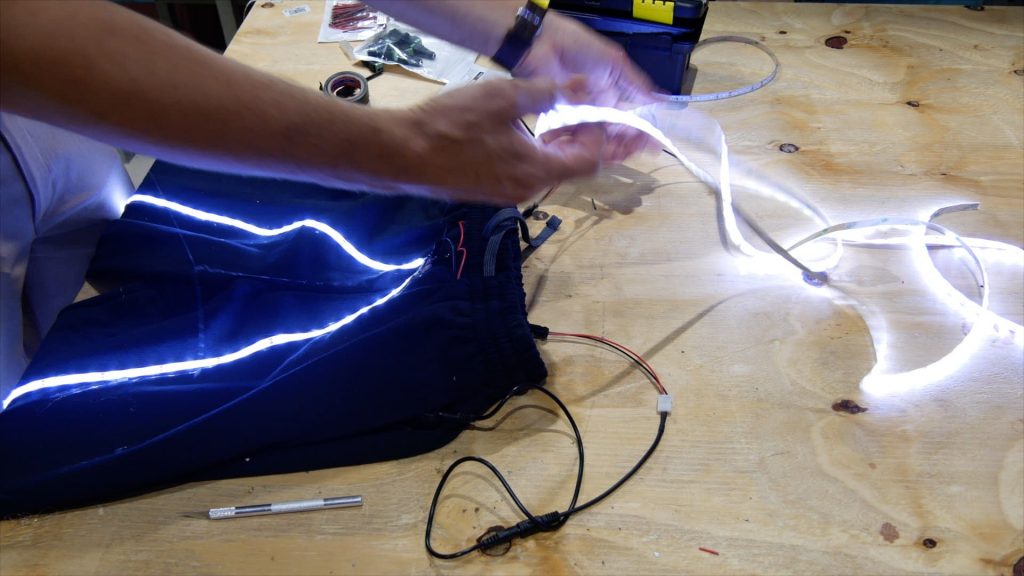 First, I used the wood embroidery hoop to keep the hood sturdy.

Next, I wrapped the edge of the hood around the hoop and used hot glue to secure it. 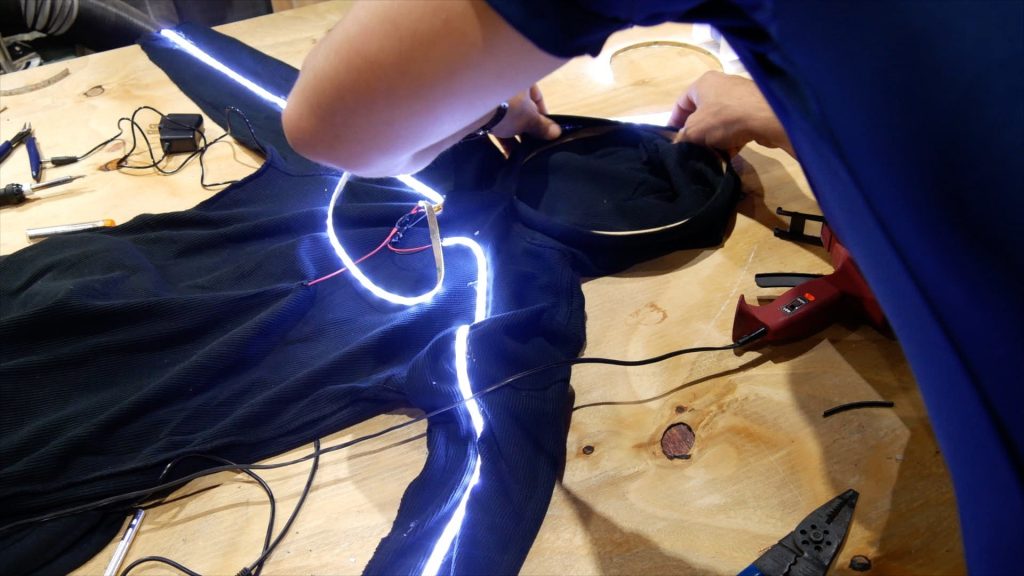 I used hot glue to secure the LED light strip to the pants, shirt, and hood hoop.

In order to accomplish this, I simply placed the LED light strips where I wanted them and secured them in place with hot glue. 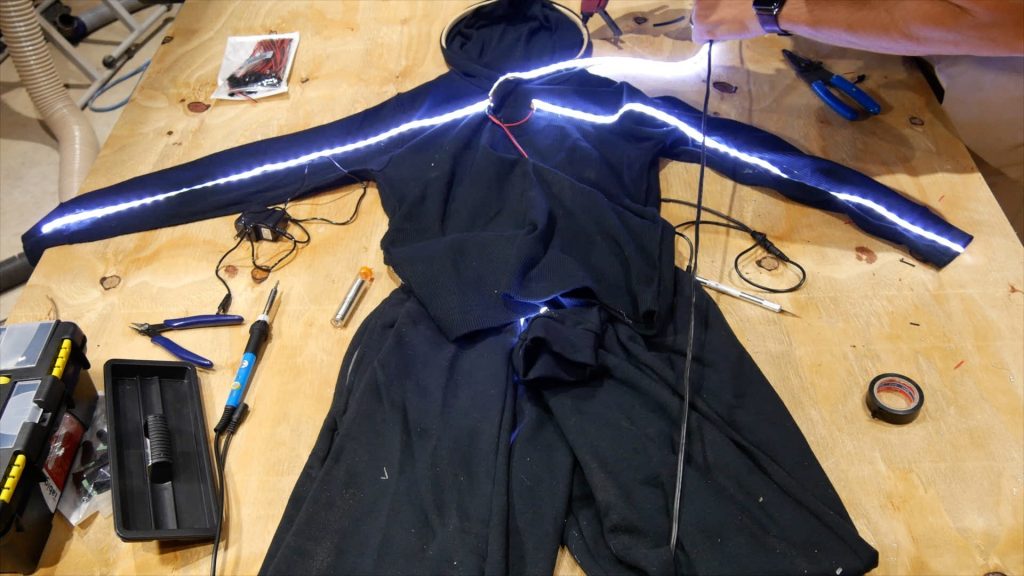 It is important to remember to remove the back adhesive protective paper if the LED light strip has it.

After I finished gluing the LED light strips, I realized the strip was a bit short. 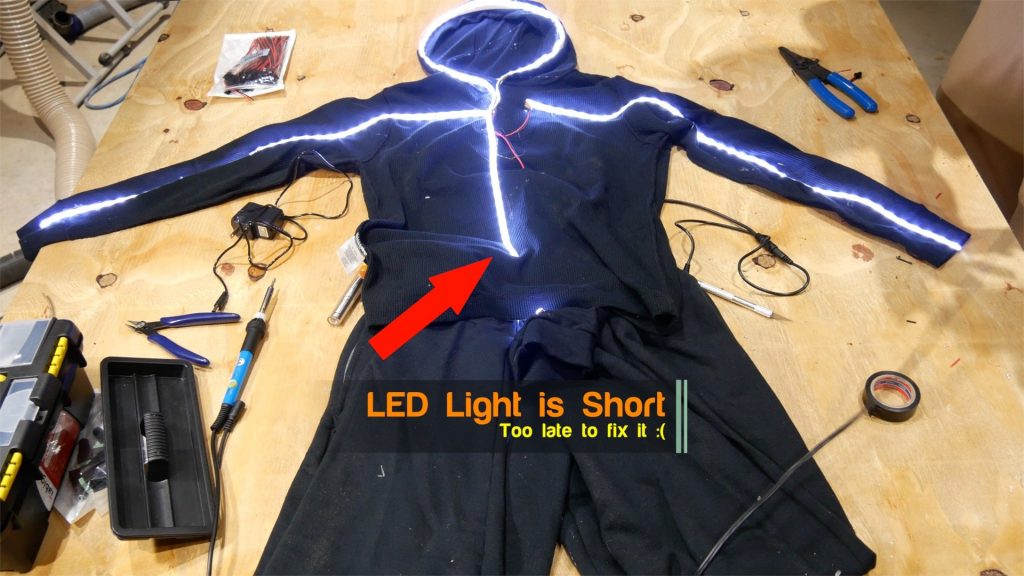 This is the reason I recommended in step 1 to add 6″ to your measurements.

I turned off the lights to see how the DIY LED Light Costume looked in the dark. 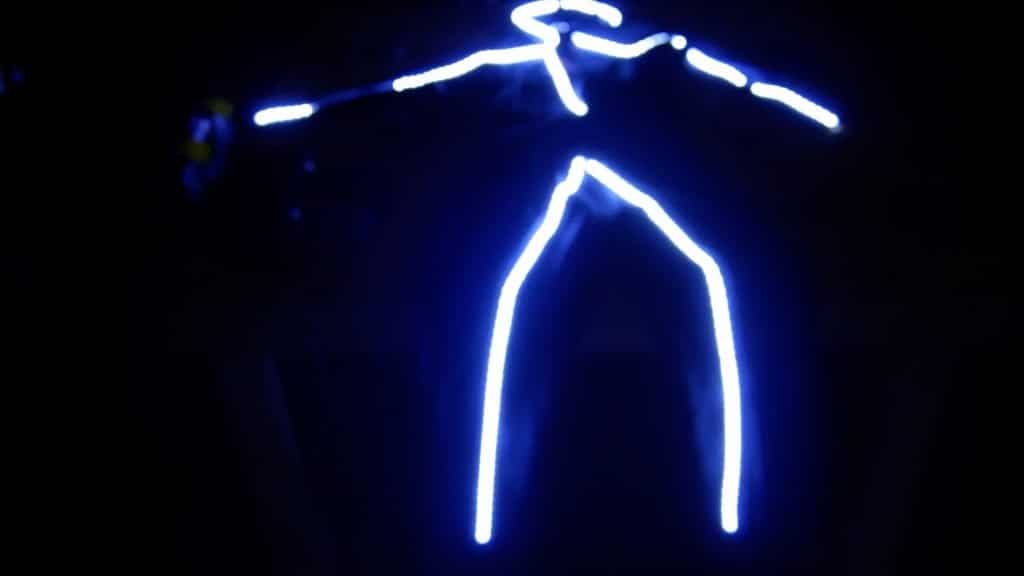 This project was fun to make because it was different and helped me rediscover my soldering skills – or lack thereof.

I especially enjoyed watching my son wear something I made for him with pride.

How do I know he was proud to wear the DIY LED Light Stick Figure Costume?

Because he didn’t complain when Stacey asked him to take pictures as he normally does.  :) 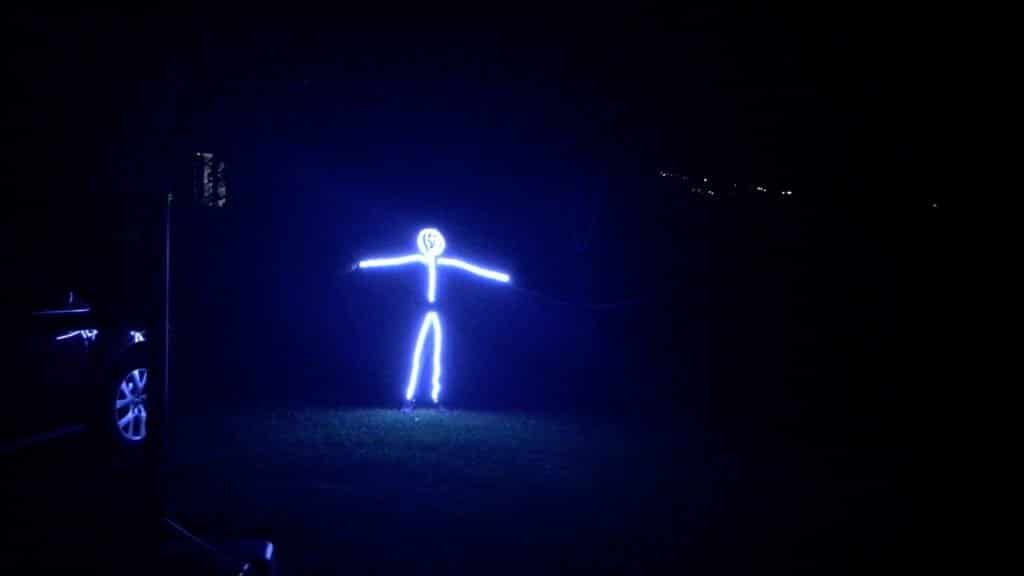 Checkout other similar projects with LED Lights such as my LED River Table and Resin and Wood wall art.

Also, I have more DIY kid projects like a Mardi Gras Chair or Minecraft Sword.

Subscribe to get 25% off any set of Digital Project Plans.

Success! Now check your email to get your discount code and come back to this page to SAVE.

This site uses Akismet to reduce spam. Learn how your comment data is processed.

Subscribe to Get 25% Off Any Set of DIY Plans.

We use cookies to ensure that we give you the best experience on our website. If you continue to use this site we will assume that you are happy with it. Ok
51 Shares
Pin36
Share15
Tweet